Dog Friendly Beaches In Cornwall From Porthtowan to Padstow 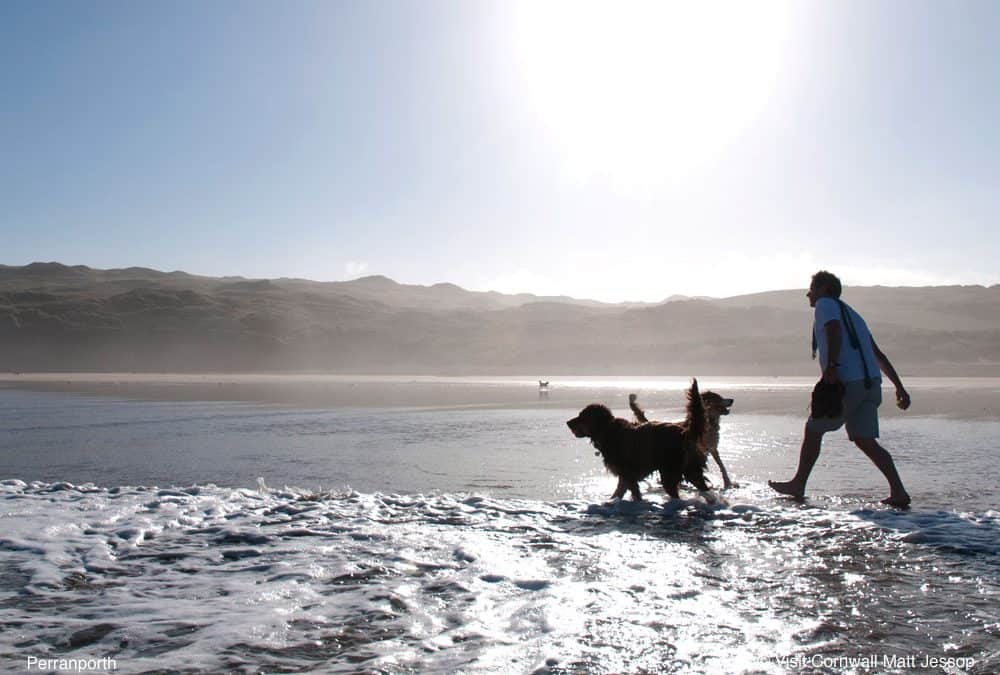 Cornwall has the longest coastline in the UK with over 300 miles of golden sand and smaller beaches your dogs can enjoy running free near the sea in doggie paradise.

Here are some beaches on the North Coast where you and your dogs can play on the beach all year round even in the summer months when the dreaded summer ban comes into place.

Trevaunance Cove
This beach is located at the foot of St Agnes. It is great if you want take the kids rock pooling, or catch some waves. There is also an annual Easter dog race with local amenities close by.

Holywell Bay
This beach has almost a mile of golden sand and is close to the popular holiday resort Newquay. If you have a family why not come down and explore the rock pools and small stream by wondering down to the beach with your kids while letting your pooch run free.
There are plenty of facilities close to the beach in the small village including ample car-parking as well as an on duty lifeguard available from 19 May – 30 September.

The name Holywell is derived from holy well and it is believed this refers to a cave at the northern end of the beach. This cave is only accessible at low tide the cave contains an unusual rock formation which creates a series of basins.

One of Holywell Bay’s most distinctive features are the twin rocks just off the coast. These two huge rocks are known as Gull Rocks or Carter’s Rocks.

Porth Joke Beach
This sandy beach is situated in a deep cove between headland, with Crantock beach to the north and Holywell Bay to the south.
Porth Joke is ideal for a family stroll or playing ball with the dog with rock pools and caves to explore and more peaceful than nearby neighbours Holywell and Crantock.

Access to Porth Joke is fairly limited with the small car park being a fair walk away.

Daymer Bay Beach
This beach lies east of Rock featuring picturesque views of the Camel Estuary and Padstow. Although Daymer Bay has parking facilities; the beach isn’t suitable for wheelchairs because of the steep steps going down to the beach. There is plenty of sand to run along with your dog and the water is also calmer with just a few small waves so the whole family can enjoy a swim.

Mother Iveys Bay
This beach is situated in a sheltered bay on the north Cornish coast next to the larger Harlyn Bay. It’s relatively quiet due to its lack of facilities, so it’s ideal for playing games with your dog without having to worry about crowds of people.

Harlyn Bay
This is much busier and a more family orientated beach. Although this is busy during the summer months you can enjoy taking the kids down to the beach and bring the dog along.

Mawgan Porth Beach
Mawgan Porth is a dog loving beach with lots of sand for you and your dog to run along and enjoy watching them paw prints in the sand. This beach is prefect if you have a dog that is a little nervous when it comes to people and other dogs because it is fairly quiet in comparison to other beaches on the north coast.

Watergate Bay
Watergate Bay has over two miles of golden sand which will tire out your pet and your children who can also enjoy exploring the many rock pools.

Why not pop into the Beach Hut for some delicious food and drink while soaking up the sunshine rays or the hotel’s Living Space for some Mediterranean cuisine which dogs are welcome in both.